Last month, we celebrated the 20th anniversary of our company.

In the small anniversary party, I recalled our young days.

Though there may be some mistakes because it was many years ago.

1. Actually we started in Kichijoji not Shibuya.

We started from a room in Kichijoji which had 1 room, a tiny kitchen and a unit bath. Ogura-san, Nagatome-san, some other members and I stayed there and talked about our strategies. When we changed our limited company to a stock company, we decided that our basic salary was 70,000 yen. Considering our total sales income, it was a brave decision to decide to have our pay fixed.

The board members were poor. We used to buy cheap bentos near our first “office”. The shopkeeper of bento shop recognized that we were really poor, so he often gave us free additional instant miso soup packs. We didn't eat the free miso soup packs at lunch and kept it until evening. We made miso soup with a half-boiled egg for our supper.

Sometimes we'd like to eat Sushi. Three of us used to buy one Sushi Box which was sold for around 500 yen and contained one of each kind of Sushi. The way to share is - At first we do Rock-paper-scissors, the winner can select one and eat it. The 2nd winner can take one next. Loser take last. After each took one Sushi, we do Rock-paper-scissors even more seriously. That was our rare moment of luxury.

Picked up from the side of the road. We needed it for our endless working. 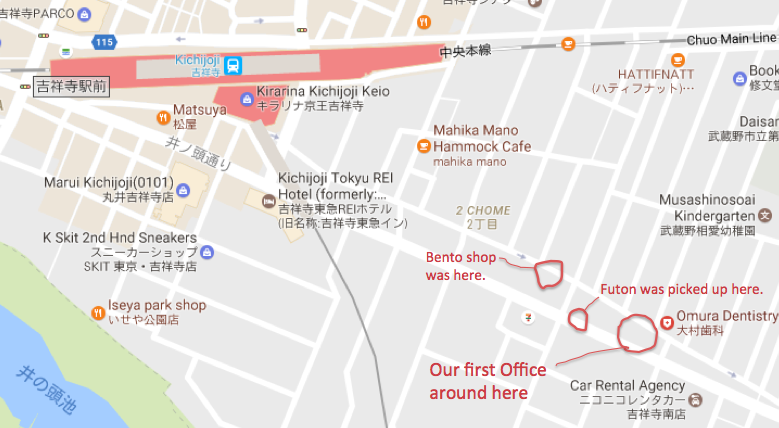 5. What kind of discussion did we have?

Private Home PC teacher for elderly people, Business Harbor plan (a kind of platform for remote work), PC delivery service like pizza, Linux box and so on. Some members left to handle other internet business.

We assigned jobs to registered students, but these students sometimes were irresponsible and abandoned their jobs. At that time, we had to follow up the jobs by ourselves on behalf of those bad students. It was not a big problem because we were also students.

The only rule I remember is that we prohibited each other from playing Diablo, because that addictive and exciting game always prevent us from doing work.

8. What was the biggest news in our early stage?

Our first product, "Ring”, an internet server composed by Linux and assembled PC box from Akihabara appeared in a newspaper with the title "Price Destruction". Ring sold well. One month, we won the prize for selling an internet line "OCN economy" the most because we sold it bundled with our server.

9. What was the biggest secret in our early stage?

Around 2002, mobile phones could receive only small size e-mail which contains only few hundreds character. Ogura-san (CEO) hoped to read full contents of e-mail via mobile phone, so he made a script which can split e-mails into small pieces and forward them to mobile phone. But one day he received an e-mail which contains a big binary and the script produced millions of small e-mails. Those emails generated by the script seemed to attack the "j-phone, Inc." servers ( j-phone, Inc. is an old mobile phone carrier; the first firm which provided mobile phone with the service of receiving internet e-mails; merged to KDDI many years ago ). Because carriers had no system preventing from huge flow of e-mails in those days, the service seemed to be completely down for a few days. We, SOMEHOW, escaped from this trouble, and we fortunately didn't need to apologise or compensate for the trouble that we cause to j-phone.

10. In conclusion, are the three board members close?

The question I (we) was often asked. We always answer "No, because we rarely go along in private". It's half true, and it's half misrepresentation to hide the fact that we also have no idea how we should answer.

To be exact, we're always changing. Today's CEO, Ogura-san is not the last year's him. The other borad member, Nagatome-san too. One day we are close, that is, have the same opinion, the other day we're not close, that is, might battle with each other. That’s why this question is hard to answer.

However, I believe that they can continue to change and improve themselves, same as me. Close or not, it depends on the situation. That is our best answer, I think.