Hi Everyone! This is the 7th day of our HDE Advent Calendar, and my name is Jeffrey Lonan, currently working as a DevOps Engineer in our Cloud Product Development team.

As I have an interest in history, I decided on writing about my trip to Mikasa park in Yokosuka, so please bear with me as I tell the tale :)

Having been in Japan for 8 months so far, I always wanted to visit the Mikasa memorial ship in Mikasa Park, Yokosuka, as it is very much related to my interest in history. The centerpiece of Mikasa park is the former Imperial Japanese Navy Battleship Mikasa, a warship built in the early 20th century, and a well-preserved one at that. 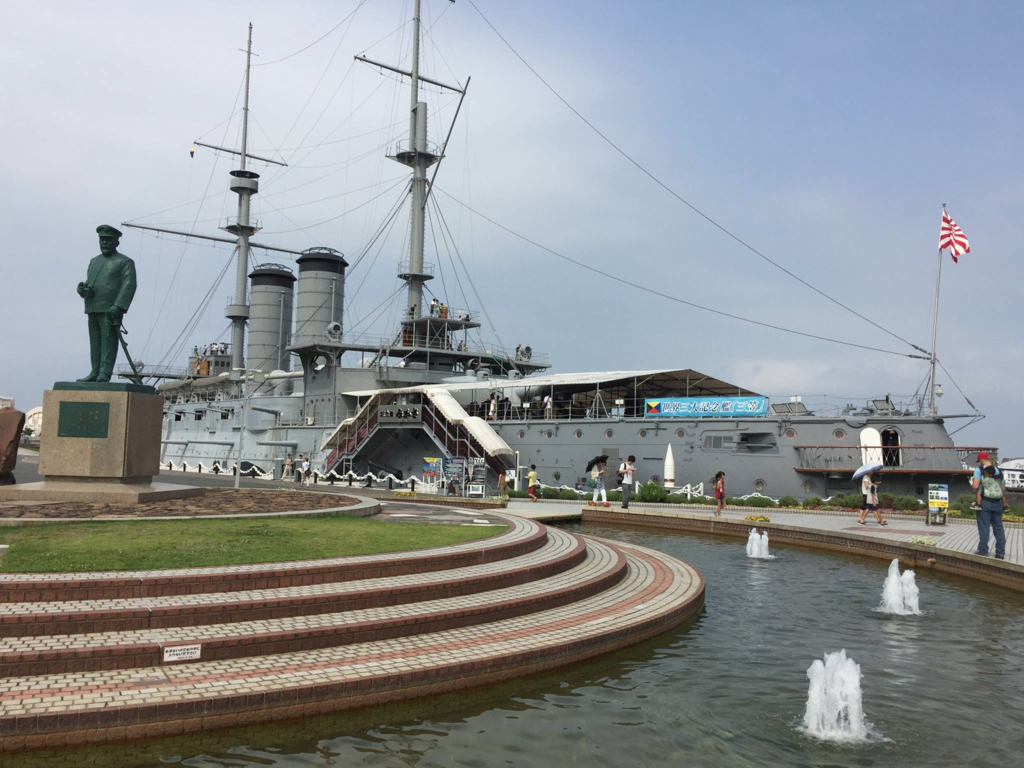 Did you know that the Mikasa was British-made? The Mikasa was built and launched in 1902 from the Vickers Shipyard at Barrow-in-Furness for the Imperial Japanese Navy. 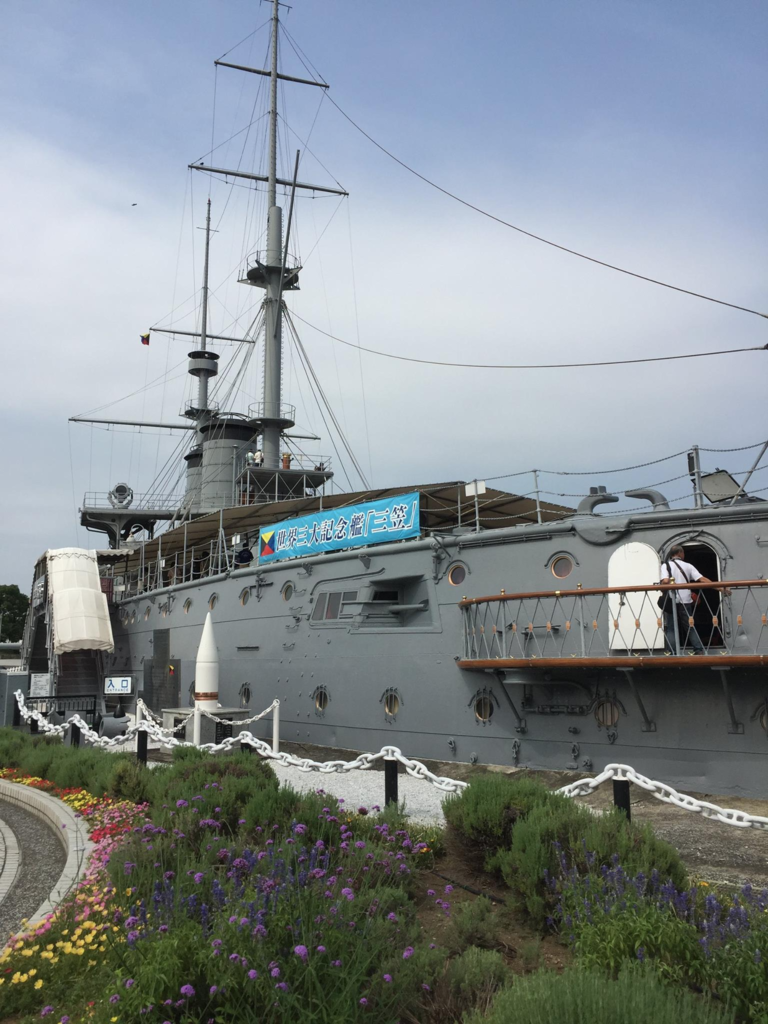 The design for Mikasa was based on the Royal Navy's Formidable-class Battleship with additional armaments. It's Primary armaments consist of four 300 mm (12-inch) main guns in 2 turrets and Secondary armaments consisting of an array of 14 smaller, 152 mm (6-inch), guns. The main guns can fire up to 14 kilometers away. As a comparison, modern anti-ship missiles can have a range of up to 200 kilometers! What a massive technological gap in less than 100 years!

They even have the original Barr & Stroud optical rangefinder! (My apologies for the geek-out moment there...) 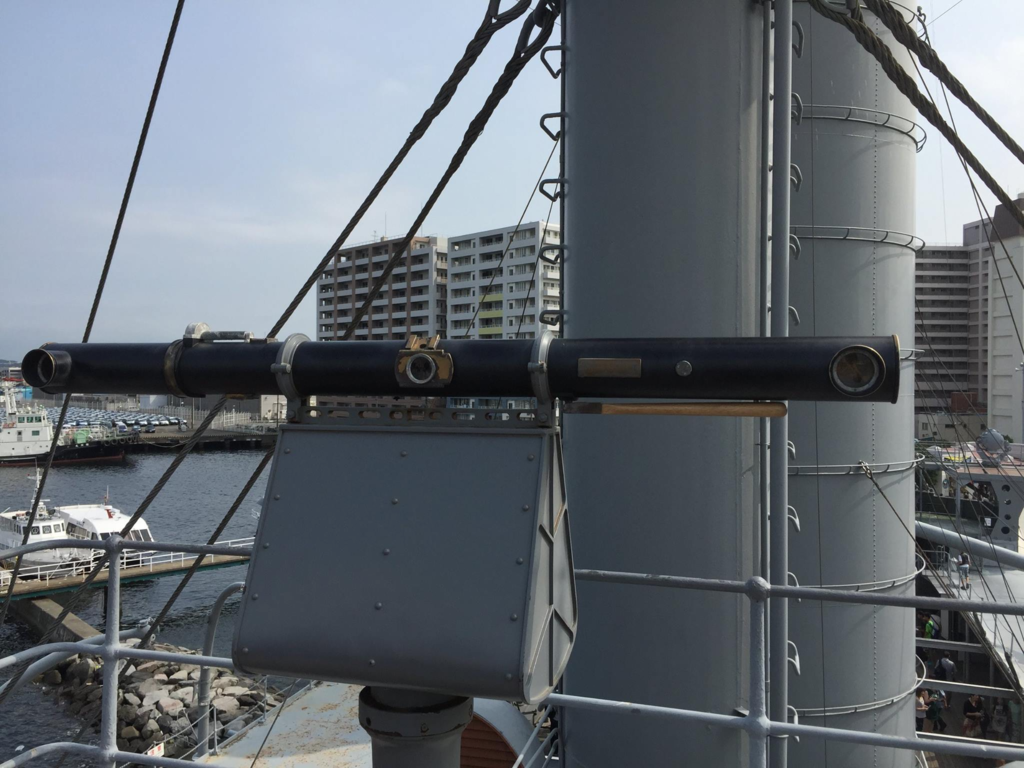 This thing is a high tech tool of its day. It is used to aim the main guns at the target, as battles are fought within visual range in those days. The person manning this rangefinder have to look through the scope, calculate and make adjustments, and then tell the gunners how to adjust their guns. All this while under heavy fire from the other side! The gunnery officer must have nerves of steel to man and operate this thing!

Compare it with the 21st century, where modern invention like radar, GPS and UAVs makes fighting feel like playing a video game, where what you see is just a dot on an LCD screen. Targeting adjustment are handled by sophisticated softwares, and you simply press a button to fire a weapon at a target.

So, what's so special about this ship? Well, the Mikasa became famous when it was made the flagship of Admiral Togo Heihachiro (東郷 平八郎), the commander of the Japanese Navy during that time. During that time, Japan was fighting a war with Russia, and the Russian Tsar decided to send reinforcements from Europe to the Far East in the form of battleships and cruisers, grouped together as the Russian Baltic Fleet

The Japanese found out about this and prepared their own fleet to intercept and engage the Russian Baltic Fleet in the Tsushima straits between Korea and Japan. This battle is also known as the Battle of the Sea of Japan (日本海海戦） 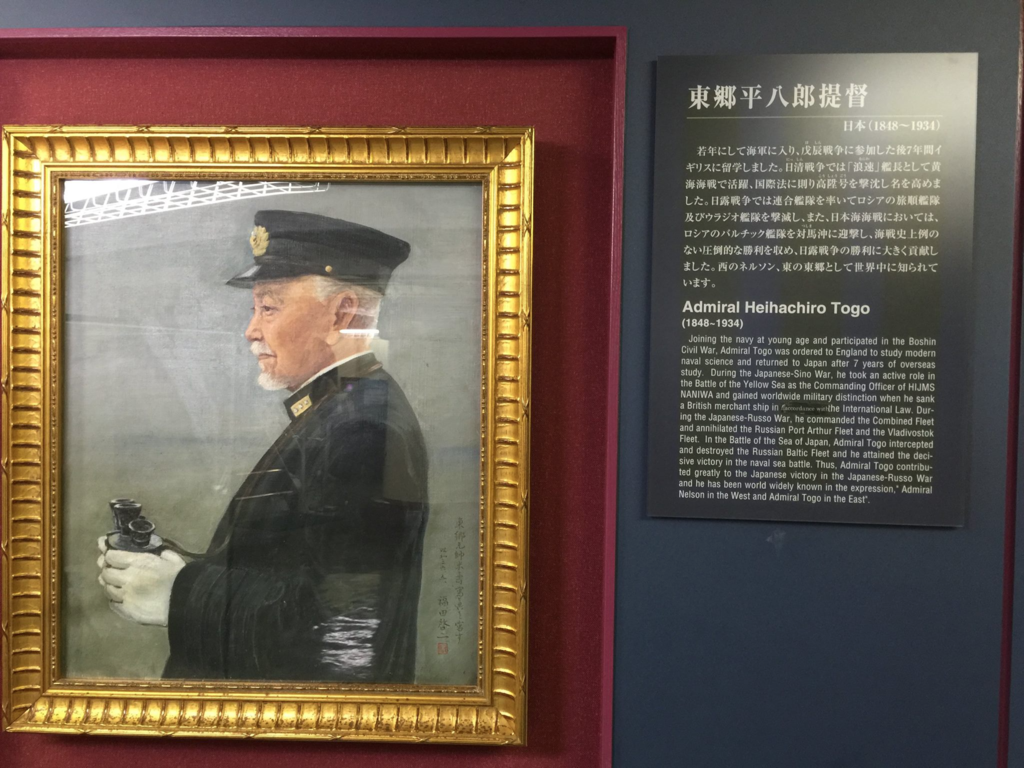 After the Russian Baltic Fleet was sighted, Admiral Togo, departing with his fleet, sent this famous wireless message to Tokyo 「本日天気晴朗ナレドモ浪高シ」 (Today the weather is calm, but the waves are high), signifying a supreme calm and confidence in his ships and men, even though there is a possibility that the battle might have destroyed the entire fleet.

As both fleets sighted each other and preparing to fight it out, Admiral Togo ordered the "Z Flag" be flown up the Mikasa's halyard. 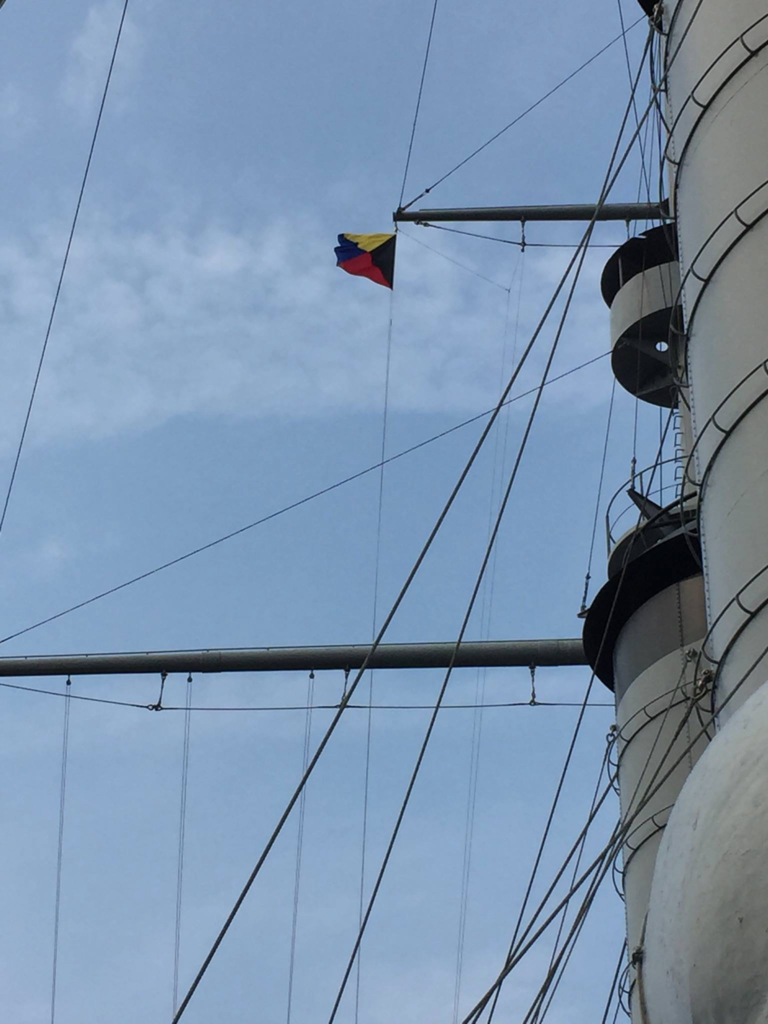 The Z Flag was a special signal flag used by the Imperial Japanese Navy to convey a predetermined message to the fleet, 「皇国の興廃この一戦にあリ、各員一層、奮励努力せよ」(As the Destiny of the Empire lies in this battle, let each one do their utmost). 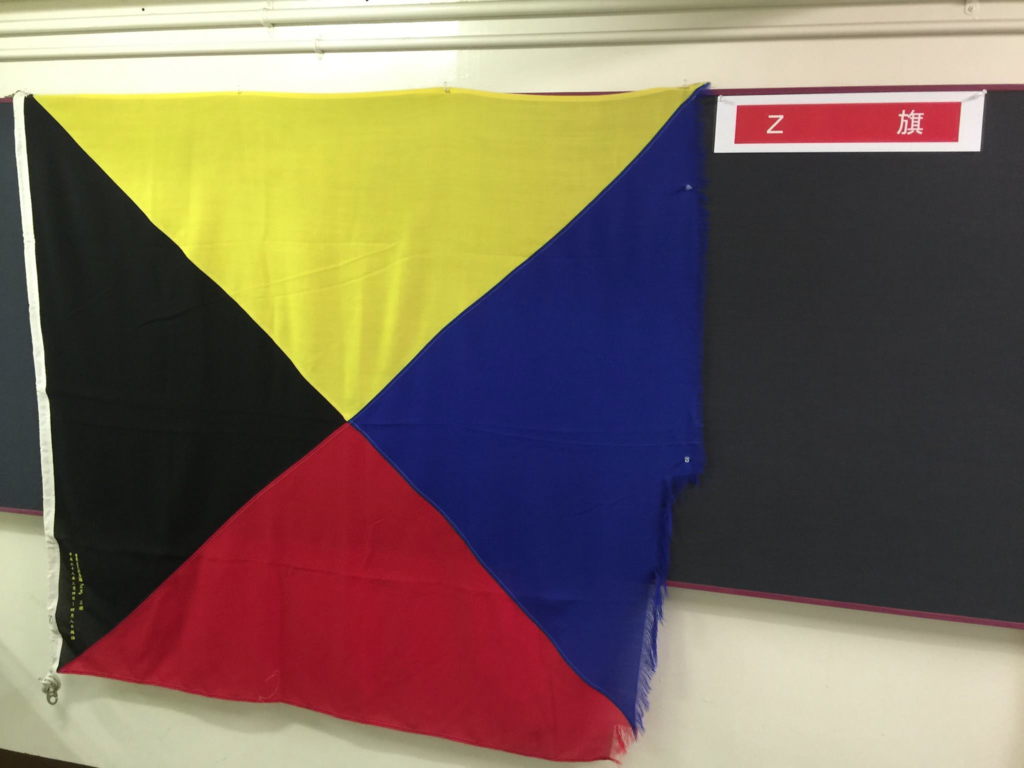 In the end, the Imperial Japanese Navy emerged victorious over the Russian Baltic Fleet. This battle is also known as the last naval battle ever where a ship surrendered and was captured intact.

In the years after the battle, the Z Flag and its message have acquired a legendary quality to it, similar to Admiral Horatio Nelson's signal during the Battle of Trafalgar "England expects every man to do his duty" 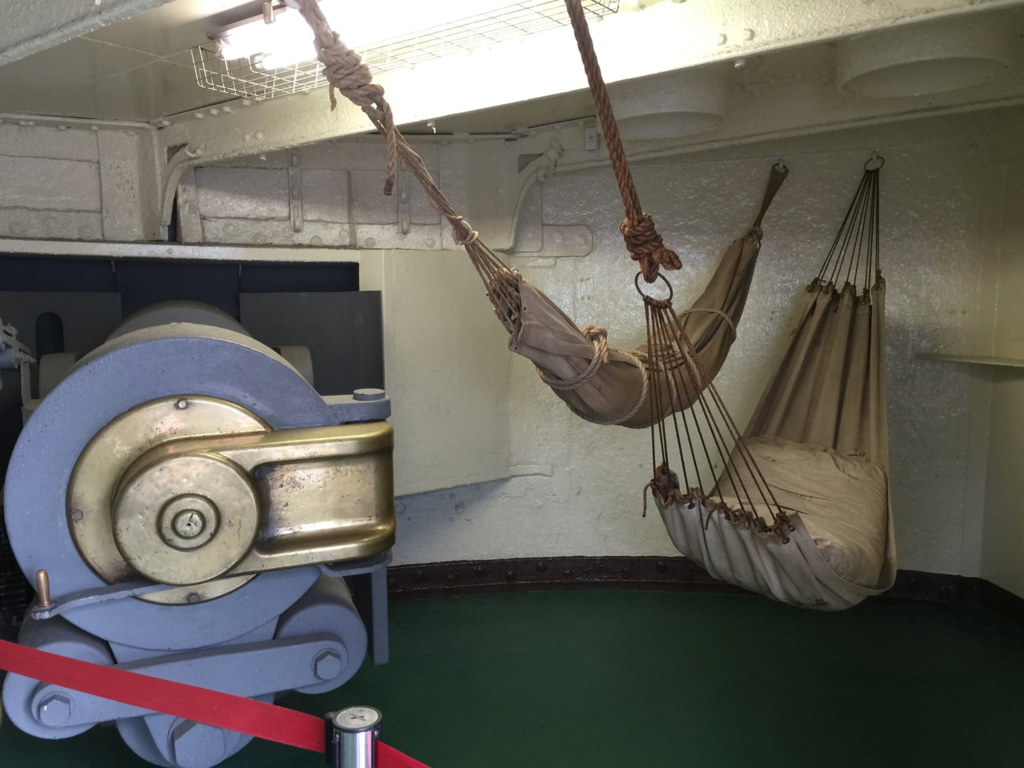 Note the hammocks. As the nascent Imperial Japanese Navy was modeled after the Royal Navy, they also adopted some of the customs from the Royal Navy, including using hammocks instead of bunks. Interestingly, during the battle , a British Royal Navy officer, Captain William Pakenham, was assigned to the Battleship Asahi, another ship fighting alongside Mikasa

Captain William Pakenham wrote a report detailing the Battle of Tsushima, including how effective the big battleship guns perform in battle. This report influenced the British Royal Navy to design and build a revolutionary battleship of that time, the HMS Dreadnought).

Sadly, after the 2 world wars, the Mikasa was neglected and its condition deteriorated, and at one point, it was used as a dance hall.

In the 1950s, the newspaper Japan Times led efforts to raise fund from the public to restore the ship, and in 1961, the restoration was finished and Mikasa was opened to the public as the Mikasa Memorial Ship, where it remains to this day as the only surviving example of a Pre-Dreadnought battleship in the world. 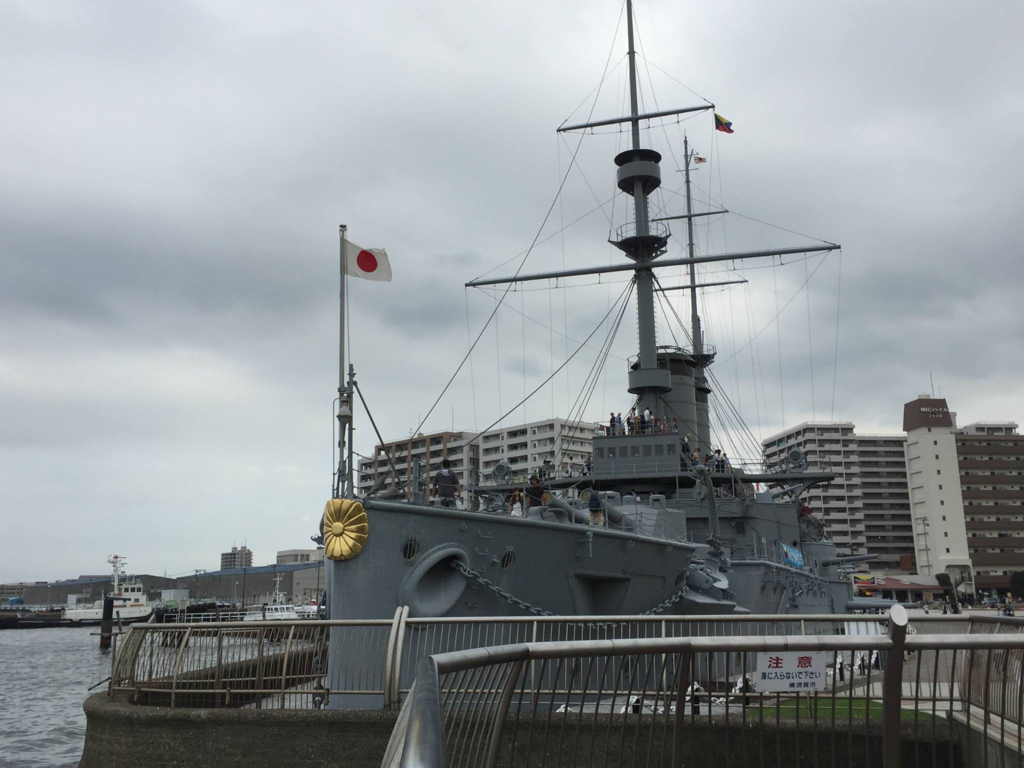 Truly, the last of its kind.

To me, this is indeed an interesting artifact of history, and really satisfied my interest on the Naval history of Japan, and of the world.