Howdy everyone! I'm Richie Ogura, CEO/CTO of HDE, Inc.
This is the first post of HDE Advent Calendar 2016, on which HDE members do “one day - one person - one blog”, from December 1st - 25th.

3 years ago, we decided to start hiring people from all over the world, both in order to get great talents, and to go global. To achieve that, we started our plan to make English our official language. Last October (October 2016), finally we carried out our "Write in English, speak in English or language common to the group" policy, and now we're using English and Japanese, along with other languages in our office in Tokyo.
This made our company to gain diversity quickly, which made our business to grow at a high pace, and pushed us to spread out of Japan (recently we opened our first foreign branch in Taipei!). 3 years ago we had only Japanese people, but now we have people from more than 10 different countries in total at our office in Tokyo.
Although there are companies adopting English like us, it's not yet popular here in Japan, where most people speak only one language. We even got featured in a newspaper recently.
So in this article, I'd like to share some topics regarding how we have proceeded with this plan, and what kind of problems we faced.

2016 Oct: "Write in English, speak in English or a language common to the group" policy

The first and obvious obstruction was the English ability of our members. Since we got established in 1996, we had run business for 17 years in Japan only, which means, of course our members, including me, had no business English skill. So, we thought we need some way to ramp up our English ability.
We first had a TOEIC-IP test for all  our employees to measure our current English ability at that time. After that, we roughly classified our members into four types. Apparently, there was distribution among employees. 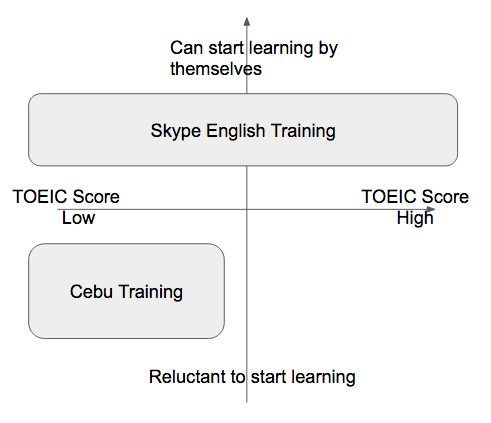 We didn't want anyone to drop out, so for the 3rd quadrant people, we offered a 1 month English training at Cebu island.
Ken, the head of Cloud Product Development Division, became the first one to try this training in 2013, and since then, we regularly send our people to Cebu island. It's only 1 month, so it doesn't make an instant effect, but people who come back from Cebu always seem more confident using English. They can improve if they continue learning; and they do improve in most cases!
For everyone, including the members who's been to Cebu, we offered company-paid Skype English training. The good thing is that the Skype English training company (QQEnglish) is also based in Cebu, running school there, so you can continue your lesson on Skype with the same teacher you got a lesson in Cebu school, even after you come back to Japan.

We didn't make any specific TOEIC score target yet at that time, because we were not sure how is the score related to real English skill. After this first TOEIC-IP test, we are now taking it regularly at a place close to our office (roughly 30-40 people participate in the exam). Our current conclusion is like we need TOEIC 700pts to read and write English in our company, and we need around 900pts to carry out real business or business related discussions. 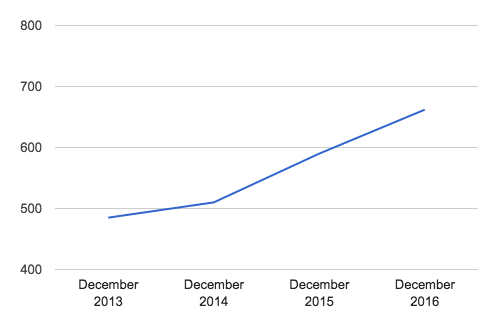 TOEIC score average of our company

As you see, we are still improving ;-)

Then we started to accepting interns from foreign countries. We started to have 2-3 interns from abroad to work at our office, for about 1-2 months, full time. We also had several exchange students studying in Japanese Universities as interns. We didn't require Japanese ability basically, so most of them couldn't speak Japanese at all. And the only way to communicate with them was to talk in English. I think this changed our company's atmosphere very much.
Because most of them spoke English as their second (or sometime third, fourth) language, they were understanding how difficult is to acquire language ability. Also our Japanese members knew that they studied hard, so everyone in our company respected them, and tried to talk with them in English when working together.
We also started hiring some of them after the internship program finished.
This internship program is now promoted as HDE Global Internship Program.

Not All Teams Proceed At The Same Pace

Soon after we jumped on the train of "Englishnization", we faced many problems. One obvious problem we found, was that all teams don't proceed at the same pace. The R&D team, which had non-Japanese people relatively early, had an urgent need to change all of their meetings, documents, workflow into English, because otherwise they can't work with each other. Soon HR team which started global recruiting faced the same problem. But for example the Japan sales team didn't have a real urgent business requirement to change their main language. So, we made roadmaps of English adoption for each team.
It differed between teams, but all roughly consists of 3 steps:

Step 3: Online written discussion that will be preserved and referred later, such as threads on issues/pull requests, or discussions on ML/SNS, must be in English. Team must have the ability of oral English communication to discuss topics in English (must be ready to welcome non-Japanese person to the team)

We made objectives and deadlines regarding when to achieve which level, and allowed those objectives to be different between teams. This helped very much to make clear what we should prepare, and to avoid unnecessary anxiety.

We never expected this, but we've found that most hardware in our office requires Japanese reading ability.
We had to put a lot of labels on things, to let our international members operate on office equipment. 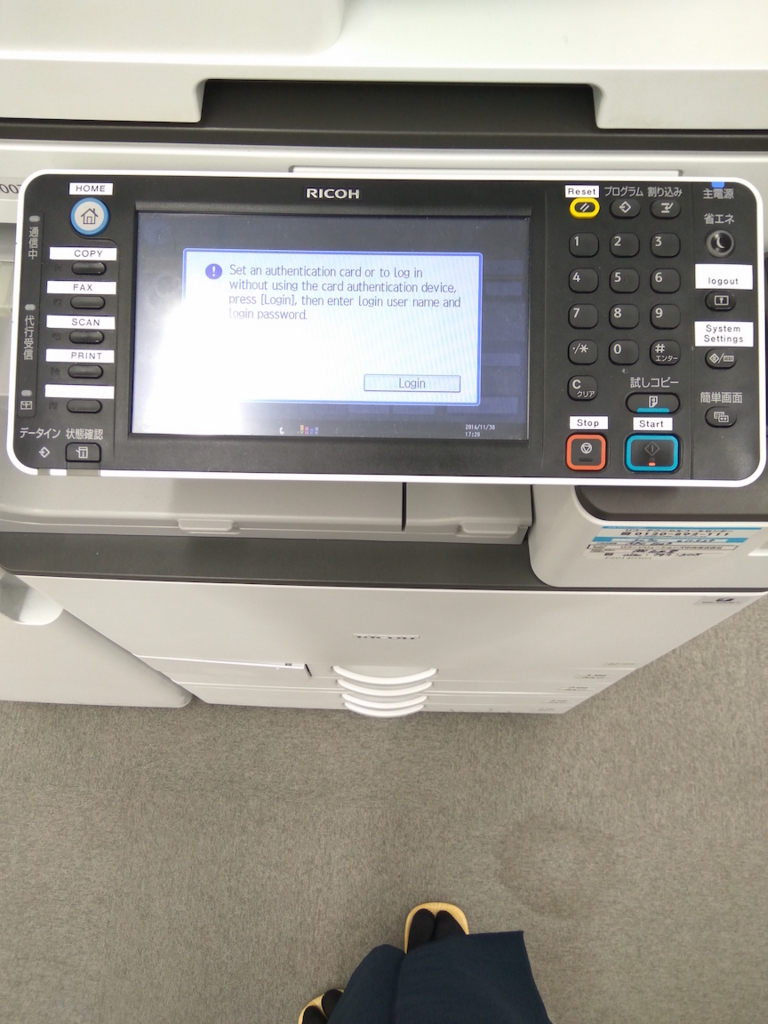 Copy machines had English UI, but buttons only had Japanese on it, so we needed to put a label on it 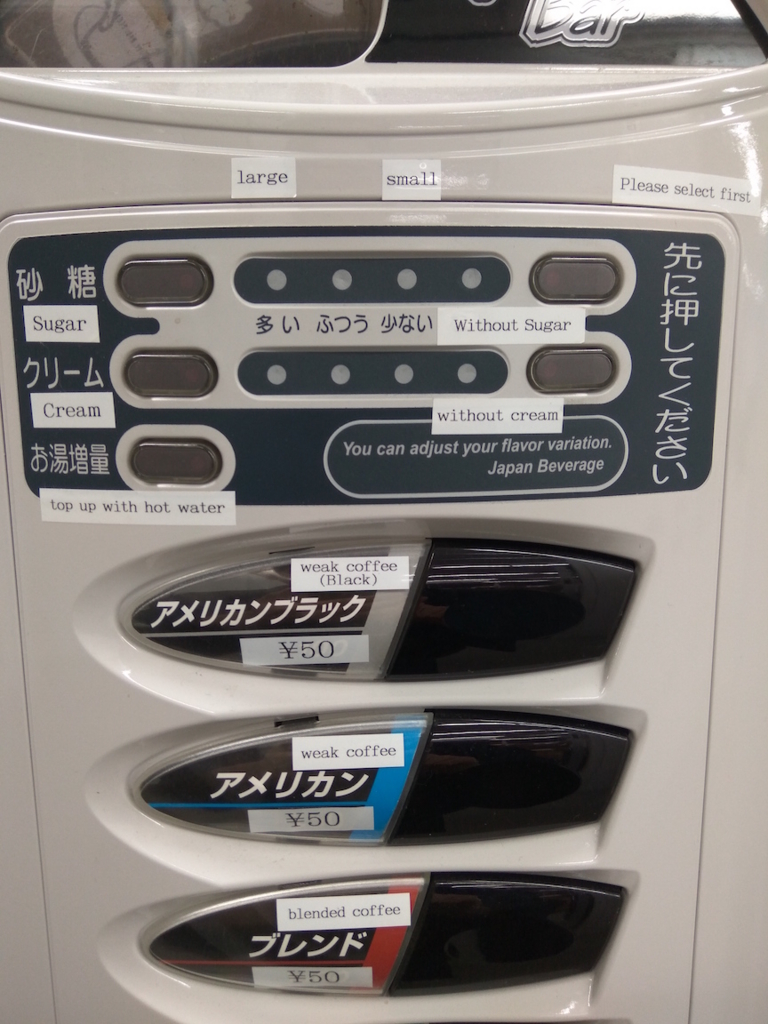 The same thing sometimes happens for IT systems, or forms required by the local government, etc. I think Japan has a room to improve in this area.

Why "Write in English, speak in English or language common to the group"?

Written words will be searched and read by future colleagues. Spoken words disappear in the air. When speaking, we can choose the most efficient way of communication, while when writing, we should choose the most versatile language.
In the real world, we mostly choose Japanese when we have only Japanese people in our internal meetings, but sometimes we choose English even in those cases, to get used to using English in meetings.

For full-time members who don't speak Japanese, we invite Japanese teacher to our company and provide Japanese learning program after work, because although we don't require Japanese skill, it's good to know Japanese if you're living in Japan, to get the best out of Tokyo.
At this moment, some of us speak some Japanese, and sometimes we mix Japanese in our conversation. Let me introduce some useful words which are surviving our Englishnization so far.
めんどくさい/It's mendokusai
When you want to say something it's not easy to do something or you're reluctant to do something. No good translation in English.
おつかれさまでした/Otsukaresama deshita
Japanese can't help themselves say this after the meeting or when they are leaving the office. And it's contagious.
なるほど/Naruhodo
Something like "I see". Mostly used as a stamp :naruhodo: on Slack.
まじで/MJD
Used when you can't instantly believe something and want to show that you are surprised.
へー/Heeeee
To show that you're impressed by something.

In a homogeneous team, we take it for granted that everyone is the same, sharing the same standards and values, so we tend to point the finger at someone who acts differently, as the famous Japanese proverb says "A nail sticking out gets hammered in".
On the other hand, in a diverse team, because difference comes first, we look at what different strength we have, how we can help each other, and we appreciate the core values we share. The culture accepting difference, is the greatest thing we've achieved in this 3 years. I believe this made us resilient, strong, and agile. 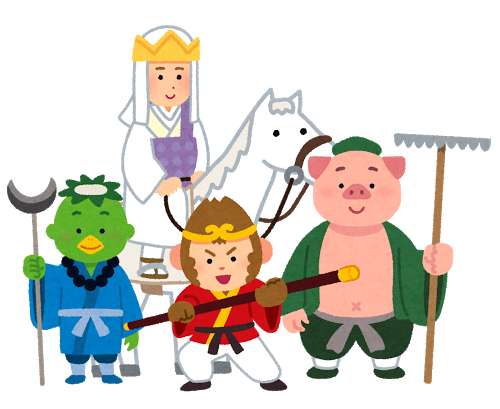 But diversity is not just strength. It's also fun to have! I feel so blessed to have the chance working with people from different backgrounds. I can never get bored with them every day!
That's it for today, thank you for reading!
« HDE Advent Calendar Day 2: David's guid…
Profile